Production of Haze Wax, the material used to make Wa Rosoku candles, is on the verge of a crisis. In 2015, the Keihoku region of Kyoto City’s Ukyo Ward became a new candle production area. This project tackles two issues—a material shortage in a traditional industry and industry promotion in a sparsely populated area—and may serve as a model for the future of craft production. 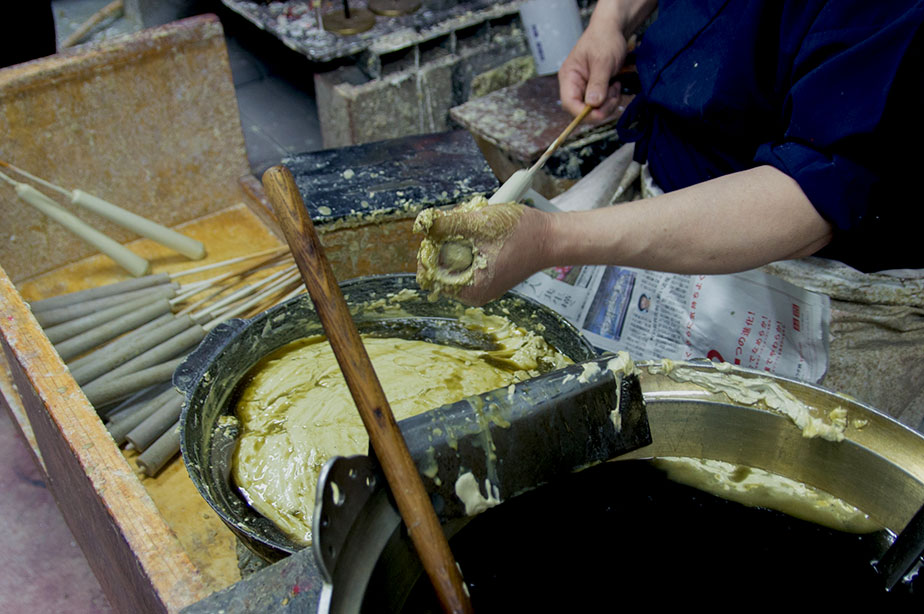 Production of Haze Wax, the raw material used to make Wa Rosoku candles, is on the verge of a crisis. Haze (Toxicodendron succedaneum, also known as the “Japanese Wax Tree”) is a deciduous tree in the Anacardiaceae family. Its fruits have long been used to make Japan Wax, an important source of fuel that provided light. However, this material is disappearing at an even faster pace than Wa Rosoku, which are no longer essential for daily life.
As past Haze Wax production areas like Fukuoka, Kumamoto, Ehime, and Wakayama are making less of this material, the Keihoku region of Kyoto City’s Ukyo Ward started producing Haze Wax in 2016. This project tackles two issues—a material shortage in a traditional industry and industry promotion in a sparsely populated area—and may serve as a model for the future of craft production.

Yoji Mishima, director of the Keihoku Agriculture and Forestry Promotion Center (Agriculture and Forestry Promotion Office, Industry and Tourism Bureau, Kyoto City) and Tomoyuki Inoue are making rounds to view Haze trees planted on an experimental basis in the mountains of Kyoto City’s Keihoku region to check how they are growing and if they are being damaged by wild animals such as deer or rabbits. The Haze trees, enclosed on all sides by a roughly two-meter fence, have finally reached the height of 40 centimeters after one year.

People say that warm climates are best for cultivating Haze, and at first it was not even clear if this tree would successfully grow in the Keihoku region, which experiences a wide range of temperatures each day. Mishima and the other members had countless worries such as the soil, sun exposure, and snow damage. Haze bark is also eaten by wild animals and its leaves by insects. It was a year of forward progress and backward retreats—after the trees grew a small amount they were damaged, and after healing the branches were broken off.

Mishima said, “There are no records of Haze being grown in Keihoku, so everything was a new experience. We first felt relief when the trees survived the winter. They bear fruit after around three years, so I just pray they will keep doing well.”

The Keihoku Agriculture and Forestry Promotion Center is mainly growing Budo Haze, a variety from Wakayama Prefecture. It planted over 1,000 seeds in the spring of 2016 and also grafted 200 trees. In 2017, it is working to produce seedlings for planting and grafting. It is also continually performing slow, steady tasks like mending fences destroyed by deer and removing insects from the leaves. Mishima and Inoue are watching over the Haze as they grow in the forests surrounded by cedar trees. They both laughed, saying, “Haze is a member of the Anacardiaceae family, so one issue is that it causes rashes when we work with it.”

The cultivation of Haze trees is being jointly undertaken on an experimental basis by Kyoto City’s Keihoku Agriculture and Forestry Promotion Center and local farmers who volunteered to participate in the project. The plan is for this cultivation to be sequentially taken over by newcomers to the farming profession at the stage of potential profitability. Kitakuwada High School, the only school in Kyoto Prefecture with a specialized forestry department, is also participating in the project and is involved in Haze cultivation as one facet of its classwork.

This project is unique because it does not merely grow Haze trees, but also focuses on the overall process including candle making in Keihoku. Hirokazu Tagawa, president of Nakamura Rousoku Ltd., is one of the founders of Japan Wax Kyoto Co., Ltd. He explained the overall aim of the project, saying, “We hope that Keihoku will become a raw material production area for candles and other traditional crafts in the future.”

“With cooperation from the last candle maker in Wakayama Prefecture, we intend to transfer this equipment and expertise to Keihoku to begin Haze Wax production. We also hope to build a Wa Rosoku production base someday with the aim of making Keihoku into an integrated production area for Wa Rosoku. Up until now, Wa Rosoku production has been divided into different areas for raw material (Haze Wax) manufacturing and processing, but we are striving to revive this industry by performing these processes in one location,” he said.

Candle manufacturers in Wakayama have no successors, and this project involves an unusual transfer of technologies across different regions. Presses are being developed to extract wax from Haze fruit with cooperation from the Kyoto Municipal Institute of Industrial Technology and Culture (a local incorporated administrative agency) and press manufacturers. Continual attempts to achieve greater efficiency with cutting-edge technologies are being made based on the traditional manufacturing methods cultivated in Wakayama.
In addition to Haze growing, the region would be greatly changed by the establishment of candle-making workshops. New industries bring new jobs and may be a major method for halting population decline in the aging Keihoku region.

Tagawa said, “It sounds nice to talk about upholding the materials of a traditional industry, but locals are more concerned about their livelihoods than with any great cause. The final goal of this project is the acceptance of a new industry after the prosperous forestry and agriculture industries in the Keihoku region, and to create an environment where we Wa Rosoku craftsmen can continue our work with peace of mind.”

Haze cultivation and wax making were valuable sources of income that sustained the finances of various domains during the Edo Period. After the Ryukyu Haze variety was brought to Japan from East Asia in the 1500s, Haze trees were planted across Western Japan as a way to encourage new industries. Haze trees bear fruit after the rice harvest, so they provided ideal work for farmers during the slack season. The scenery of red Haze foliage also came to symbolize the late summer.

Selective breeding was frequently performed to create higher-quality wax, and grafting resulted in dozens of varieties such as Matsuyama Haze and Ikichi Haze (both from Fukuoka Prefecture), Showafuku Haze (Nagasaki Prefecture), and Budo Haze (Wakayama Prefecture). In this way, a great deal of Haze Wax was produced with characteristics suited to the climate and natural features of each region.

However, after cheap, Western-style candles made from petroleum-derived paraffin wax appeared in the Meiji Period, Buddhist temples accounted for the majority of demand for Wa Rosoku. And once electric lighting came into popular use, Wa Rosoku ceased being an essential item for daily life.

There were roughly 80 Wa Rosoku manufacturers in Kyoto City during the last years of the Edo Period. This number has fallen to just five, and production of Haze Wax—the raw material for these candles—is also declining.
Nagasaki Prefecture was a prominent production location, but its Haze trees were destroyed by the eruption of Mount Unzen in 1991, setting off a full-fledged material shortage for Wa Rosoku craftsmen across the country. At that time, several wax makers, major trading companies, and Wa Rosoku manufacturers made cooperative attempts to produce artificial Haze Wax. However, the composition of Haze Wax is not entirely known, and they were unable to fully reproduce this wax even though they made similar materials. This experience reminded this industry of the importance of protecting the Haze tree.

The current domestic Haze fruit production volume is less than 1% that of its height during the Meiji Period. Wax makers in various production areas are shutting down, Haze trees are quietly dying where they are abandoned on the mountains, and Wa Rosoku and Haze Wax production is in a precarious state.