“Tradition” without shape. (Small) Story [1] on the succession of Asahiyaki

Asahiyaki pottery is a pottery tradition going back 400 years in the Uji area.
What was it Hosai Matsubayashi, the 15th generation potter who passed away in November of last year, wanted to communicate to the next generation of successors?

TOP SPECIAL “Tradition” without shape. (Small) Story [1] on the succession of Asahiyaki 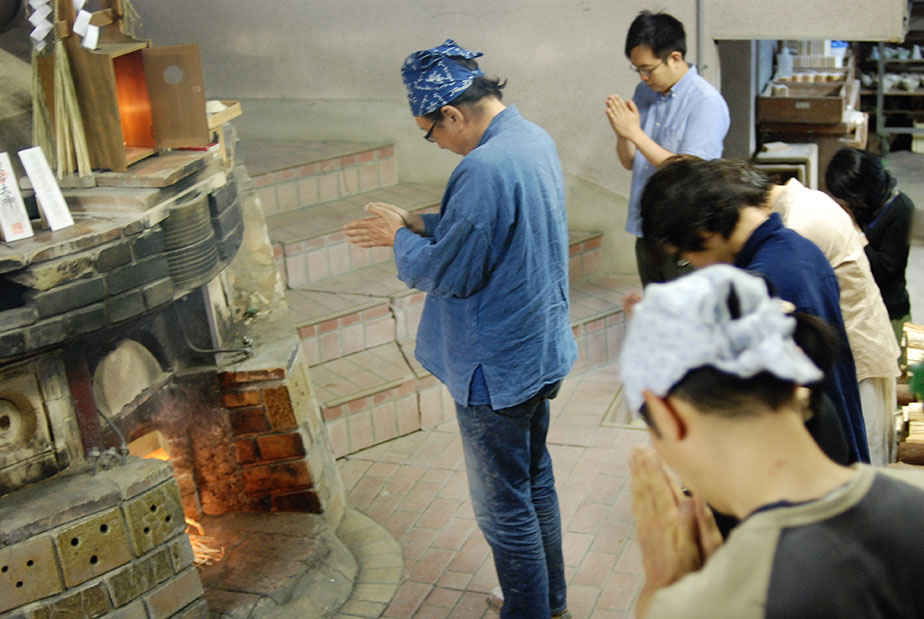 “Tradition” without shape. (Small) Story [1] on the succession of Asahiyaki

Asahiyaki firings span three days, the fire continuing to burn in the noborigama kiln during that time. Of course, I could not be there every moment of the three days and three nights. But, during the firing, I photographed and listened to Hosai and his son, Yusuke, who took turns by the kiln early in the morning and late at night.
“When this piece is over, I want to cover Hosai’s everyday pottery process.” That’s what I was thinking during the firing. I wanted to summarize and establish an overall idea of the potter whose work continues 400 years of traditions.

When the firing was done, those three days worth of the everyday surged forward, like a bill waiting to be paid off. Over for the time being, I was thinking I should contact Hosai sooner or later to consult about my next project when I received news of Hosai’s passing.

The kiln was opened in the Keicho era (1596-1615). Uji is a tea village where superior clay has long been extracted. Here, tea bowls have been made for 400 years. The first generation of potters, given the name “Asashi” under the instruction of tea ceremony master Kobori Masakazu, was counted as one of Enshu’s Seven Kilns.

May 23, 2015 at 20:32. 15th generation Asahiyaki potter Hosai Matsubayashi transfers the fire from the votive lights of the household shrine to the mouth of the kiln. Doing so, the firewood begins to crackle, and a fire enters the Genyou noborigama kiln for the first time in six months. The Matsubayashi family and artisans all put their hands together at the household shrine and pray for a safe firing. At Hosai’s “Yoshi (now then),” they all lower their hands. I could see their expressions, a mixture of anxiety and relief. Four hundred years have passed since the Asahi kiln was opened in Uji. This is a scene that has repeated over and over again. The firing that is to start will span three days. The Asahi workshop uses the noborigama kiln for firing two or three times per year. The irregular stream of flames of the noborigama kiln, which burns chopped pine, are what create those kiln changes, sometimes creating expressions that surpass the imaginations of the creators. The results of a half-year of working with earth and glaze depend on the results of the kiln firing.

No excuses to be made

Hosai was haggard from his production, which lasted through the day before, and the kamazume (kiln packing) work. “I always feel a little better once the firing starts. Right up until the firing, I’m at my potters wheel, thinking, “It’s neither this way nor that way,” working without a sense of day or night. I work that way up until the very end.” And when packing the kiln, over and over I move and worry over my work. At home, I get told, “You’re old now; work in moderation,” but I’ve always been like this. I can’t change now. Somehow, it seems I can’t put something in the kiln that I can make excuses up for.”

“If I fired the kiln and died there, I think I would be very happy as a potter. Though it doesn’t work out that way very often,” Hosai says, laughing.

Hosai was diagnosed with cancer in 2013. Hospitalized and receiving anticancer drugs, Hosai got better for a time. But the cancer returned in 2014. At this point, six months have passed since the combined regiment of anticancer drugs and radiation was resumed.

This firing is exactly Hosai’s 50th since succeeding as the 15th generation potter in 1995. Since learning from his father at the age of 26, Hosai says he was taught countless things at the kiln. “I say teach, but my father never said anything. I just watched him work with clay up to his physical and mental limit and sleepily load the kiln with chopped pine. I didn’t think anything of it at the time, but I still can picture him. If I ever get stuck with work, I think, “What would my father do?” He helps me now then. Now, (my eldest son) Yusuke watches me like that, doesn’t he?”

Genyou, the noborigama kiln built by past generations

Genyou, the kiln built by Hosai’s father, 14th generation Hosai, is a structure that uniquely fuses qualities from noborigama and anagama kilns. The 14th generation Hosai was a keen researcher, building five kilns throughout his life. He built the first liquefied petroleum gas kiln put to practical use in Japan and a smokeless noborigama kiln among others. A culmination of trial and error, he built this Genyou kiln at age 54.

This Genyou kiln is built so that the further you go back, the greater the incline. Inside, the kiln is split into four firing partitions. Over 1,000 pieces are crammed into each partition, named (forward to back) “Dougi,” “Anagama,” “Nobori 1,” and “Nobori 2.” The temperature and stream of fire differ completely depending on where pieces are packed. Also, the best place for a piece is different depending on the material (clay or stone) and the glaze. Tea bowls and pots both differ. Kiln packing before adding flame to the kiln is just like completing a jigsaw puzzle one piece at a time.

Appeals of the kiln changes

The reason 14th generation Hosai spent his life building kilns lay in the fact that Asahiyaki’s greatest appeal is the kiln changes. There are two types of Asahiyaki “Gohonde” pieces: “Kase,” which features a yellow-ish spotted pattern reminiscent of a deer’s back, and “Hanshi,” with light pink spots. Kiln changes with these exquisite appeals are only created by repeating oxidation and deoxidation processes irregularly in the nobori kiln. This is beauty by coincidence. However, the generations of the Asahi workshop imagined the process with previous generations’ work as examples, and intentionally tried to create kiln changes with earth and flame. The Genyou kiln is the fruit of this trial and error.

“The mechanisms behind kiln changes; there are parts that we somewhat understand and others we don’t understand at all. But, even things we think we understand don’t turn out the same in the next firing. You get disappointed, you say, ‘Was that an illusion?’ But, you’re working with earth and fire, so it’s ambiguous. Every time, I write down the process of the firing in detail. The input time and amount of firewood, temperature, humidity, the oxygen concentration in the kiln, etc. Everything we know is recorded in detail. But, even with tens of years of records, I still make mistakes. In one firing, only about 20% of pieces can I say ‘this turned out well.’ A certain amount of effort seems to be a part that does not reach humanity” (Hosai).

“I have a shrine and a sacred straw rope for the kiln, right? That isn’t ritualistic; it’s more the thought I am entrusting the firing to the gods.” While speaking, in Hosai’s eyes is Yusuke, headed to the kiln holding chopped pine.
(Continued)